Excerpted from August 27, 2015 article by The Chronicle Food Team

It has been only five years since Off the Grid held its first food-truck gathering at Fort Mason, four years since San Francisco made it easier for trucks to park on city streets, and three years since anyone in the Bay Area has attended a wedding that didn’t end up in the parking lot of some banquet hall. San Francisco and San Mateo counties currently each have more than 100 permitted food trucks, and there are many more in Alameda County, where loncheras first lined up along Oakland’s International Boulevard in the 1980s.

In a city where most iPhone screens are cluttered with delivery apps, San Franciscans still leave their desks for lunch when a food truck pod sets up nearby. Off the Grid has competition from food-truck clusters such as Moveable Feast and Bites Off Broadway, but it continues to be the major player, with more than three dozen events every week. There are permanent truck pods — several of them — under the Central Freeway.

Today’s food trucks have killed off the myth that mobile food vendors were all roach coaches. Yet the boom has not flooded the streets with amazing food. Most of us have stood in line for 20 minutes to receive a compostable clamshell stuffed with limp fries drenched in meaty glop. We’ve bitten into our share of starch-plus-fat wrapped in a flour tortilla. (The two food groups that seem to thrive in the truck age: tacos and, somewhat surprisingly, pizza.)

Five years in, the Chronicle Food Section thought it time to honor 20 trucks that offer something greater than the average. (Note: We primarily evaluated trucks that circulate in Marin, San Francisco, Alameda and San Mateo counties.) They may serve a type of food you can’t get anywhere else — or they may simply be the trucks we gravitate to over and over again. 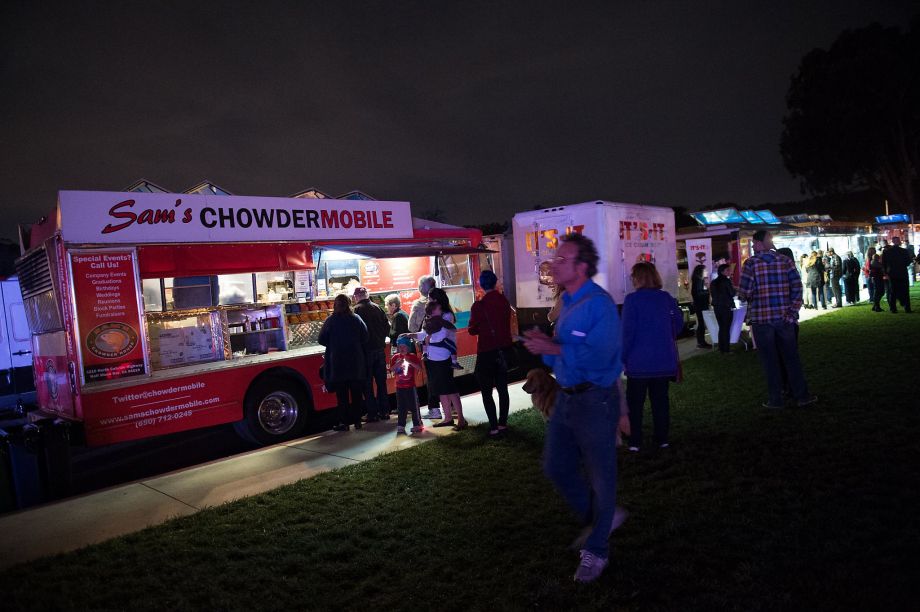 Sam’s has a legit brick-and-mortar down in Half Moon Bay, but if you’re a car-free city dweller, the Chowder Mobile is the best way to get a taste of Sam’s pristine seafood offerings, including rich and creamy clam chowder, crab cakes that are heavy on the shellfish and light on the filler, and one of the best lobster rolls outside New England. (SF)