The mobile concepts you should be watching. 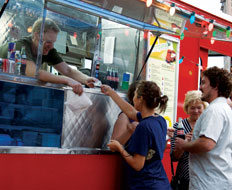 The day of the roach coach is dead.

With their innovative flair, pop culture allure, and culinary exploits, food trucks have become one of the restaurant industry’s most en vogue, recession-thumping trends.

Arriving as much from consumer interest as practical economic considerations, the street food fervor spurred a rush of inventive food trucks. Some truck leaders boast lofty culinary credentials; others pair an entrepreneurial spirit with homemade sass. Some source local ingredients and share a socially conscious message; others carry dynamic exterior designs and even some shock value. Most maintain an active social media presence, often alerting customers by way of Twitter or Facebook, while all have garnered attention for their unusual and unexpected addition to America’s foodservice landscape.

Blanketing urban environments on the coasts, led by New York City and Washington, D.C., on the right and Los Angeles, San Francisco, and Seattle on the left, food trucks are increasingly roaming the nation’s streets. QSR went in search of America’s top 20 food trucks and found a scene thriving in spirit and surging in momentum.