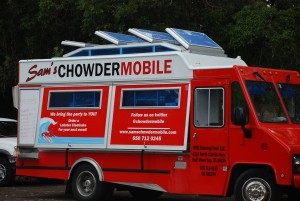 You hear a lot of stories these days of food trucks growing up on the streets and becoming traditional sit-down restaurants. San Francisco’s Sam’s ChowderMobile has achieved success doing the exact opposite. First they opened the magnificent Sam’s Chowder House Restaurant (225 seats) overlooking the Pacific Ocean in Half Moon Bay, then they launched Sam’s ChowderMobile food truck.

The menu items that have made Sam’s Chowder House famous are available from the Sam’s ChowderMobile food truck that keeps busy all over the San Francisco Bay area.

This time of year the New England Clam Chowder is hard to resist – little neck clams, yukon gold potatoes, smoked bacon and cream. Unlike other clam chowders Sam’s broth is light and savory, no flour used as a thickener.

Sam’s Famous Maine Lobster Roll was named one of the top five sandwiches in America by The Today Show. It’s simplicity makes this a huge achieveement. It’s just delicious Maine lobster lightly tossed in warmed butter on a delectable toasted bun! Miles from Maine, but you’d never know it.

The ChowderMobile uses cholestrerol and trans-fat free vegetable oils in their fryers, they also serve their food in biodegradable and compostable packaging. They care about the sea and their own envriornment.

The quality and freshness of Sam’s ChowderMobile rivals it’s big brother Sam’s Chowder House. Usually the view from the truck is not as dramatic as from the restaurant, but the food is just as great.